Akiko Nakajima, Associate Professor at the Department of Regional Development Studies introduced the day’s lecturer and Director Fitzgerald took the podium.
The title of the special lecture was, “The Culture, Economy, and Business Environment of Ireland.” It started with the history of the EU and went on to cover a broad range of topics, such as the culture of Ireland, Ireland’s relationship with the EU, the U.K., and Japan, and the state of the Irish economy from a historical perspective up to the present day.
During the Q&A session following the lecture, questions were asked in English and Japanese about topics such as Irish politics as well as Director Fitzgerald himself.

The special lecture was attended by about 150 students, including not only students registered for the course but also others participating in the Toyo Global Leader Program.

Profile of Director Fitzgerald
Derek Fitzgerald was born in Limerick, Ireland, where he received his education. He has been living in Japan since 1994, working as an engineer at a private enterprise while also actively engaging himself in enhancing interactions between Japan and Ireland during his time as Chairperson of the Irish Network Japan from 2001 to 2009. He was appointed Director of the Japan Office of Investment and Development Agency Ireland (IDA Ireland) in January 2010. 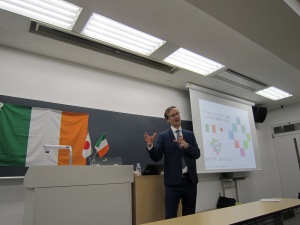 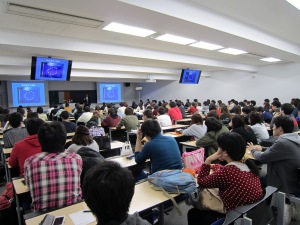