The Outline of the Research Center (Institute of Regional Vitalization Studies) 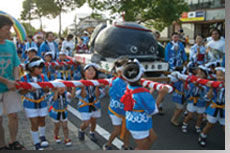 I have been appointed as the Director of the laboratory from April, 2016. More activity of the former research center is raised, and I would like to advance the research center activity that can contribute to society. Thank you.

Now, then social advance and the case that "vertical division" every specialist cannot become too firm and correspond to complicated society when specialization is developed, indicate the "silo effect", written by Gillian Tett. I can think people with a will, will be the first step of problem solving in an area to take a hand beyond the fence of the field. It can be called the characteristic Visiting Research Fellow of a teacher and off-campus of various faculties and departments organizes a research team in crossing way beyond the limit of the existence organization, and that this research center works on a specific theme from such point of view. Though an existence concept is exceeded by members' gathering in a crossing, in an area, and contrasting with the region.

It is expected to put efforts to the pillar of three to the research center project "Footing Local Creation -Region Talks, Acts and Produces-" ((1) marriage and child care support in the generation when all resident's happy living support and (2) are young beyond continuous creation of tourist attractions and (3) generation in academic year 2016. Advancing the acceptance which are trust and joint research, etc. and cooperation with various related subjects of off-campus. The joint research with a local self-governing body and the implementation of a consignment study in Tokyo-to, Gunma-ken and Tochigi-ken, as well as Gunma-ken Itakura-machi with Itakura campus are being considered at present. Grasp of the reality, such as the problem that an area holds through these, drafting of a countermeasure to those, grope of the feasibility and drop to a practical business affair, crowded approach from the view point of a university.

Wrestling with a large number of promotion up to now in all part area, but the case which does not come to the realization is also judged from a population decrease and a financial delay. The resource by which it is expected to exceed the experience "and" the sense for which the open data which is possession information disclosure of an autonomous body, a positional information of a cell phone, buying behavior and the big data represented by SNS were used in such is maintained rapidly, and we can think a possibility of the local promotion through scientific knowledge is rising further while utilizing these. Thinking when we can contribute even a little as a university, by gathering and utilizing resource of the university. Such as the knowledge of each Research Fellow, the angle from student as well as experience and flexible thought.

We would like to try creation in an agreement chance with an area and Research Fellow, as well as implementation of such study. It is expected also to continue supporting comprehensively as a research center and put effort about securement of human resources and system maintenance for clarification of the problem that we are becoming lurk, agreement with the stake holder in an area, Research Fellow, and realization of a study while doing "creation in a place".

Please, so that support of everybody who endeavors after promotion of research activities aiming at further vitalization of the region, as well as everybody of Research Fellow who joins newly from April may be given.

The operation system in academic year 2016 is as follows.

The Purpose of Institute of Regional Vitalization Studies, Management Plan and Target of Activity

Civilization and public opinion we have for our objective, to contribute to area activation by planning for fusion of each natural scientific research field, studying problems in the area which changes under the international view, problems of the environment and development, and finding those countermeasures.

Target of the main activity