Outline of the centre 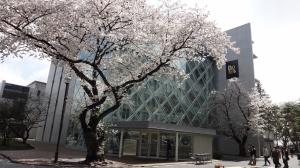 The Bio-Nano Electronics Research Centre was established in 1996 in order to initiateand carry out advanced combined studies on bioscience and nanotechnology. The Centre’s research and educational activities have mainly been supported by external funding including Grants for High-Tech Research Centres, for the 21st Century’s Centre of Excellence (COE) Programmes and for the Programmes for the Strategic Research Foundation at Private Universities organised by the Ministry of Education, Culture, Sports, Science and Technology (MEXT), Japan. The research carried out at the Centre is classified into the following four main fields;

(c)
Discovery of extremophiles and their application to bio-nano technology

A new graduate school “Graduate School of Interdisciplinary New Science” was opened in 2007 in order to educate young students and create advanced researchers by international standards based on the Centre’s research activities.

A new graduate school based on the 21st Century’s Centre of Excellence Programme, "Bio-Nano Science Fusion Course, Graduate School of Interdisciplinary New Science", was opened in April 2007. This new doctoral course accepts motivated students from all over the world to educate and create advanced international researchers in the fields of bioscience, nanotechnology and bio-nano fusion in collaboration with 11 advanced visiting professors. The master course was opened in April 2011. This course provides the master students with Workshops on Advanced Equipment and Web Educational Programmes as well as Lectures and Master Research Courses. We also started trans-departmental "Bio-Nano Science Fusion Course" for undergraduate students in 2007.

Our Centre has nanoelectronics super clean rooms (class: 100, 1000, 10000) and biotechnology clean rooms (P1, P2) and has introduced high-tech equipment regularly for conducting advanced research and education following our short- and intermediate-term strategies. As a result, our Centre was selected as a Nanotechnology Support Centre in 2007 by MEXT. Our facilities and equipment are open to any researchers from other universities and industries.

Our Centre has been collaborating with overseas research institutions and industries. We have 35 visiting researchers at our Centre and 11 visiting professors at the Graduate School of Interdisciplinary New Science. Our Centre and Graduate School have organised international symposia and seminars at overseas institutions and the Kawagoe Campus, Toyo University, thanks to which we have exchanged agreement with 16 universities and 10 companies for the development of collaborative research and educational programmes.

We have carried out fundamental studies on nanoscience/nanotechnology, bioscience/biotechnology and bio-nano fusion science/technology for the development of biomedical and environmental devices, and obtained quite a few remarkable results. Some of the results have been widely notified and five new research projects including “Development of a smart device for a quick detection of allergies and diseases” have been initiated in collaboration with industries.

A new four-storey building; “Bio-Nano Annex: International Collaborative Centre for Advanced Research and Education, Bio-Nano Electronics Research Centre, Toyo University”, was opened in March 2013. State-of-the-art equipment such as electron microscopes, scanning probe microscopes and spectroscopic analysers are installed on the ground, first and second floors and laboratories for academia-industry collaborative projects are provided on the third floor in the new building.

We will organise a new research project “Development of nano robotics for the advancementof biomedical and environmental technologies” based on the results obtained by the present project.

We would like to thank the Ministry of Education, Culture, Sports, Science and Technology, Japan for having supported the present research project since April 2011. We would alsolike to thank our collaborators including Sir Harry Kroto (Florida State University, USA), Professor Daniel Morse (University of California Santa Barbara, USA) and Sir John Walker (University of Cambridge, UK) for theirtireless support for our research and educational programmes.