The Outline for the Correspondence Course 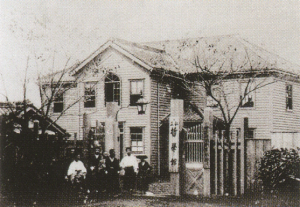 Toyo University was founded as "Shiritsu Tetsugakukan" in 1887, by the philosopher of the Meiji Period, Dr. Enryo Inoue. It has developed into a university, with history and tradition of 120 years since then.

In 1888, the year after the founding, the prototype of the ｃorrespondence ｃourseｓ in Toyo University had started.
During the Meiji period, it was the era when the people being able to take the education in the university was very limited. Therefore, Enryo Inoue issued"Tetsugakukan transcript of lecture" was issued, even for the people who had difficulty entering university for various circumstances. The "kamgaiin system" was also provided to liberate education and practice equal opportunity in the system.

Even today, there are a number of people who give up entering the university for various circumstances, and the number is not small.
Some may be willing to obtain a graduation certificate while holding an occupation, or others may be willing to get a qualification for a teaching profession as a Credited Auditor. Those under these circumstances often have strong desires to learn.
In addition, to enrich life and knowledge in the field different from the expertise, the needs for university education seem to be occurring.

The existence of the correspondence course, which rarely has the restrictions of time and the location, is viewed once more as clues to expand the possibilities of university education and offers a place of learning corresponding to various educational needs.

The Founding Philosophy, "Basis of All Learning Lies in Philosophy"

The history of Toyo University has started with "Shiritsu Tetsugakukan", founded by a philosopher, Enryo Inoue, in 1887.
Before the founding, Enryo has stated, "Philosophy is the learning which a principle of all things are set. Philosophy has to be rooted in politics, science, as well as law and art". In 1887, a school adopting this philosophy, known as "Tetsugakukan", was founded.
This is the basis of the present Toyo University.

From the Meiji Period, approximately 120 years ago when the word "philosophy" was used for the first time, until the present when the lack of philosophy is being questioned, Toyo University has walked greatly within the tumultuous history, succeeding the educational idea of Founder Enryo Inoue.

After the founding of the university, Enryo had began to come into action, aiming for "social education" and "open university", for the people "without idle funds, no leisure". For one example, the issuing of "Tetsugakukan transcript of lectures" from the year after the university establishment, gave the chances for the people who could not go to university.
This comes under the category of correspondence courses.
This was a remarkable idea in those days, and this spirit has been inherited by the present correspondence courses.