The aims of philosopher Enryo Inoue:
Examining Japan and her people’s place in the world

From the closing days of the Tokugawa Shogunate into the Meiji era (1868-1912), Japan was opening up to the world and experiencing a rapid wave of Europeanism. However, against this trend, Enryo Inoue believed that the Japanese needed to return to their true nature. And he concluded that achieving this would require each individual to cultivate “methods for seeing and thinking” in his or her own heart based on philosophy. This belief led him to establish Tetsugakukan, the predecessor of Toyo University, at the young age of 29.

In his founding prospectus for Tetsugakukan, Inoue stated that the school would “open up education to people Without wealth.” In what was a precursor to modern correspondence education, he set up a nationwide“ outside students system” for people in distant regions who could not commute to Tetsugakukan. He also began“ Sunday lectures” that resembled today’s extension courses.

Looking to expand educational opportunities to even more people, Inoue took it upon himself to embark on“ lecture tours” that would take him to all corners of the country. Having discovered that Buddhist thought encompassed “Eastern philosophy” reaching back thousands of years, Inoue lived his entire life passionately working to systematize this philosophy and spread it to all of Japan’s people.

Enryo Inoue was born as the eldest son in Jiko-ji Temple (Otani sect of Shinshu Buddhism) in today’s Nagaoka City, Niigata Prefecture. He began studying classic Chinese literature at the age of 10 and entered into Buddhist priesthood at the age of 13. From the age of 16 he was engaged in Western learning, studying such works as Parley’s Universal History, Mitchell’s A System of Modern Geography, G.P.Quackenbos History of the United States, and Malcolm’s History of Great Britain in their original English.
When he was 19 years old, he was selected from among applicants all over Japan to enter the teacher training school of Higashi Hongan-ji Temple in Kyoto as a student of English studies. The following year, he entered the Preparatory School of Tokyo Imperial University (Tokyo Yobimon) as an exchange student from Higashi Hogan-ji. There he studied for three years before entering the new Department of Philosophy of Tokyo Imperial University’s Faculty of Literature as its sole inaugural student at the age of 23.
During his time at Tokyo Imperial University, Inoue came to look at Buddhism-a subject with which he had had close familiarity since early boyhood-in the light of Western philosophy. And this led him to discover that Buddhism was brimming with “Eastern philosophy.” While pursuing his studies at the university, he published writings on his own religious and philosophical views for publication in Meikyo Shinshi, a Buddhist journal published every other day, for two years. These writings were later published in a three-part work titled Shinri Kinshin as well as in Bukkyo Katsuron Joron. Each of these books became a best seller of its day and achieved rapid recognition in circles associated with Buddhism, thought, and Christianity.
The year before graduating from Tokyo Imperial University, Inoue set up an organization called “Tetsugakukai” and began publishing a journal titled Tetsugakukai Zasshi. In it, Inoue stated, “Philosophy is study to identify the fundamental laws and phenomena of thought. Consequently, so far as ideas and things exist, there is nothing that is unrelated to philosophy.” He added that “the foundation for all study is philosophy” and “the study and diffusion of philosophy are essential to the development of national and social civilization.” He further asserted that “Eastern philosophy must be studied in addition to Western philosophy.”
Following his graduation, Inoue publicly announced his intention to establish a school that would give shape to an ideal he had long envisioned. He made this announcement as he also continued his theoretical pursuit of philosophy and Buddhism in his writings.

Inoue successfully opened his school just two years after his graduation from Tokyo Imperial University. He founded this private institution, which he called “Tetsugakukan,” after borrowing facilities of what is now Rinshoin Temple, located in the Yushima district of Bunkyo Ward. The school was open to boys aged 16 years or older and had a total enrollment of 50. Its curriculum was broken down into a first year of general studies and a second year of advanced studies. Students paid a monthly tuition of one yen. Courses on philosophy, psychology, sociology, and other topics of Western learning were offered.
Six months after Tetsugakukan was founded, Inoue published Tetsugakukan Kogiroku (a transcript of lectures at Tetsugakukan). He used this publication as a textbook to start the “outside students system,” a program that allowed students to study in their homes. Tetsugakukan received outside student applications from all parts of Japan, and the number of applicants climbed to 1,831 the following year. Today’s correspondence education program carries on what was started by the outside students system.
Inoue made three long-term overseas trips during his lifetime. The first was in 1888, the year following Tetsugakukan’s birth, when he left to tour the United States and Europe. During his more than one year abroad, Inoue sought to find the unique place that Japan and the Japanese occupy in the world. Then, after returning home, he announced that he would transform Tetsugakukan into a university.
Katsu Kaishu heard of Inoue’s plan, and he provided his continual support to this young educator-who was 36 years his junior-until he died at the age of 77.
During its early days, Tetsugakukan suffered a series of unfortunate events, including the destruction of a new school building that was under construction in a violent storm and then, later, the complete loss of its building in a spreading fire. The result was that Tetsugakukan was rebuilt at the site of the current Toyo University Hakusan Campus just two years after its founding. In 1904, Tetsugakukan was re-launched as “Shiritsu Tetsugakukan Daigaku” under the government’s University Ordinance. Two years later, it was renamed “Shiritsu Toyo Daigaku.” The name Toyo, meaning “the Orient” in English, reflected Inoue’s strong desire to build a unique university of philosophy in the Orient.

Taking on the challenges of social education The national lecture tours

At the time that Tetsugakukan was renamed Shiritsu Toyo Daigaku in 1906, Inoue had established a university, middle school, and kindergarten. However, this same year Inoue suddenly ended his association with all of these schools to embark on his third national lecture tour. Nineteen years had passed since he founded Tetsugakukan. He was 48 years old.
He was inspired to take this national lecture tour by the university education and social learning he had seen in the United Kingdom during his second overseas tour. Built around three main themes-“freedom of speech,” “respect for the individual,” and “social morality”-Inoue’s aim was to spread the ideas of social education and lifelong learning throughout the nation.
His typical daily schedule during the tour was very grueling. He traveled during the morning, gave lectures in the afternoon, and spent the evening writing. His lecture meetings were organized by people associated with Buddhism, government, or education, and usually took place in a temple or primary school.
The Meiji era was a time when government bureaucrats were respected and ordinary citizens were denigrated. Against this backdrop, Inoue called study to lift the Japanese spirit and explain philosophy to people having no special rank or title dengaku (田学; rice field study). He continued touring to encourage ordinary citizens to engage in philosophic thought by associating dengaku (田学) with dengaku (田楽; ritual music and dancing in shrines and temples that was enjoyed by people of all ages and status) until his death in Dalian, China (then known as Manchuria).
His lectures covered some 40 topics, including Imperial speech, morals, philosophy, religion, education, business, superstition, the mysterious, conditions in the Western world, and recent circumstances in overseas immigration. Over 1.3 million people came into contact with Inoue’s philosophy-based “methods for seeing and thinking” during the 5,291 occasions that he spoke throughout Japan.

"Dengaku": Originated by Enryo Inoue, a philosopher for ordinary people

Enryo Inoue began a national lecture tour of Japan in 1890 to talk about Japanese “methods for seeing and thinking” based on “philosophy.” Then, in 1906, he stepped away from all of the schools he had founded to devote himself to another national lecture tour. This tour continued until he died while speaking in Dalian, China (in the region formerly known as Manchuria), at the age of 61. By this time he had spoken on 5,291 occasions at a 2,831 locations in Japan alone, including 60 cities and 2,198 towns and villages. This photo shows the travel bag that Inoue carried with him on his travels until his death. It contained only those personal effects he absolutely needed, including a booklet for keeping notes, writing brushes, an inkstone, and a water flask. Looking at these items, one can still get a sense of the passion Inoue had for his work as he traveled around Japan. When Inoue died, news of his passing was spread throughout the world by the Associated Press of the United States. Even the New York Times carried an article noting his passing. Reporting that “Dr. Enryo Inouye, a widely known scholar in Buddhistic philosophy, is dead at Dalian.” the newspaper presented him to readers by saying, “He was President of a school of philosophy in Tokyo.” The article shows us how Inoue’s lifelong devotion to his message had attracted even international attention. 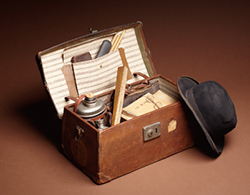